I just returned from Austin where I spent 5 days packed full of music, friends, family, good food and, of course, great beer.

I made this trip specifically for a 3-day music festival–Austin Psych Fest– featuring over 60 bands, some of which are my favorites.  Plus I have young nieces I intended to visit.  So I had just under 5 days to squeeze in family, 60 potential bands, and a long list of places to go to with friends for Texas craft beer.  I knew it was going to be tough, but I was determined to find time to imbibe in some local libations.  And fortunately I had the perfect crew with which to do so.  Between the 5 of us we were brewers, beer bloggers, beer industry employees, and just regular folks who enjoy quality beer.

First on the list: Uncle Billy’s Brew and Que.  I really love this place; located on Barton Springs Road with plenty of trees around, it’s in such a pretty spot.  I seem to have this ritual of filling up on yummy Tex-Mex nearby at Chuy’s and then stopping at Uncle Billy’s for a freshly-brewed glass of deliciousness.  I’ve had their Hop Zombie IPA, and that’s always a solid choice.  I was about to order one when I noticed something called Hotillya Drop, which turned out to be their 5th Anniversary Double IPA.  10% ABV, 100 IBU’s, and served in a full pint!  Pretty phenomenal brew right there.  But of course I had to sip a little of my friends’ Hop Zombie while I was at it. Just couldn’t resist.

I can’t believe the number of times I’ve been to Austin yet never paid a visit to the Flying Saucer.  They have such an extensive beer menu it actually took me over 15 minutes to build my sampler.   I ultimately decided on the 512 IPA and 512 Pecan Porter (two of my staples when in Texas).  Also Independence Convict Hill Oatmeal Stout–a good basic stout with a slight roasty/smoky taste, Southern Star Buried Hatchet Stout, which was my least favorite as it appeared and tasted like a brown. And finally Ranger Creek Strawberry Milk Stout.  Now that was a tasty stout with just the right amount of fruit flavor:  not overpowering but definitely noticeable.  That sampler was probably the best one I’ve ever built.  I’m a big fan of patios, so my friends and I decided to drink outdoors.  Now, there is one major difference between drinking beer on a patio in Austin as opposed to Denver:  it’s hot out there!  And there are flies. Lots and lots of flies.  So it can be a challenge to finish a pint before it gets way too warm (or before larvae appear in it).  Denverites are familiar with the patio heat factor too, but we deal with it for basically about 3 months whereas Austin’s summers obviously last much longer.  Love Austin, don’t love sweating on the patio in April (and neither do my beers).

I have a couple staple bars I need to go to each time I visit, one of which is Lovejoy’s.  They brew their own beer but also have several other good local beers on tap.  I tried their very own Dr. Shock IPA for the first time.  Meh, not really impressed.  So I had to go with a Stash IPA from Independence Brewing, as I already knew I love that one.  In fact, I decided to do a little taste test with it at The Ginger Man, my other must-go place in Austin.  Ginger Man (picture below: me with Ginger Men) has an awesome number of beers from which to choose. And when I say awesome, I mean that literally.  I open the beer menu and sit there looking stunned for several minutes until I’m finally able to pick something.  This time I was curious: who brews the best IPA in Texas?  Well of course they don’t have every Texas IPA available, but I chose 3 (that I already knew I liked) to compare side by side: 512 IPA, Independence Stash, and Live Oak’s Liberation IPA.  Talk about tough choices.  All wonderful; not a bad one in the bunch.  But I’m pretty sure I’ve got to go with the Stash.

After all those hops I wanted something different.  I had hoped to try 512’s Barrel Aged Double Pecan Porter, which I found out about right before my trip.  But when I got there I was told it had sold out everywhere, almost immediately.  Then I noticed it was listed as “coming soon” on Ginger Man’s menu, so I figured it wouldn’t get tapped before I had to leave town.  I decided to ask…just in case.  Success!  I’m already a big fan of their normal Pecan Porter, so I knew this would be something special.  The bourbon taste was very strong–just the way I like my barrel aged beers.  It was thick and packed with flavor.  Very, very excellent beer.  I am lucky I got to try it. 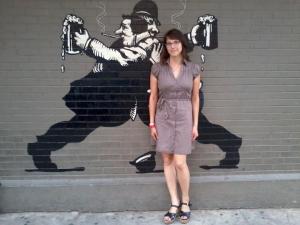 The Draught House is yet another place to go for a wide selection of beer.  Like Lovejoy’s, they brew their own but also carry plenty of others.  I had the Deep Ellum IPA, my first experience with that particular brewery.  It wasn’t bad…pretty good but not great.  But since most Texas beers are only $2.75 on Sundays, I couldn’t complain.

Yet another fun place to drink with a plethora of brews from which to choose is Easy Tiger.  It’s a bake shop & beer garden and, while I can’t speak about the bake shop, the beer garden is a wonderful place to hang out.  They have around 30 beers on tap plus quite a few in bottles and cans.  Either they didn’t have any Texas IPAs on tap that day or I didn’t see it on the menu, so I decided to try Real Ale’s Full Moon Pale Rye Ale.  I love Real Ale’s Lost Gold IPA, but it wasn’t available on tap anywhere I went this time, though I was able to order it in bottles at various places.  The Full Moon didn’t really do anything for me.  It’s not a bad beer, but just not my style as I need an extremely hoppy or malty brew, and this was neither.  But I imagine lots of people would enjoy it.

When I went to places that didn’t have tons of microbrews available, I still stuck with Texas beers and ended up trying a couple of things I didn’t love but that are worth mentioning.  And one I really did like: Austin Beerworks Fire Eagle IPA; it reminded me a lot of ODell’s IPA.  Beerworks is pretty new to the brewing scene, so this was the first beer I’ve had by them.  Real Ale has a blonde called Firemans #4; I don’t care for blondes but it was a quality beer at least.  And then good ole 512 Brewing…this might well be my overall favorite Texas brewery.  I had their Rio Blanco Pale Ale; pretty good for a pale. As you might know from some of my other blog posts, I like my beers extreme: the hoppiest or maltiest around.  So I can be somewhat hard to please when it comes to my personal tastes, but I like to mention if other styles are at least quality brews that others might enjoy.

What a fantastic trip.  I got to experience many great bands, hang out with some of my favorite people, eat some amazing food (one of which was my first ever “waffle taco”), and drink A LOT of phenomenal beer.  I couldn’t have asked for more.  And then, day 5 at the airport: a bottle of Lone Star.  Enough said.