Tuesday night at Star Bar was the Beer Cocktail Melee, an event for American Craft Beer Week.  I had been curious about beer cocktails for a few months, yet I hadn’t had the opportunity to try one.  When I heard about this, there was no way I was going to miss it.  First, all the cocktails were made with Great Divide beers, so that was incentive number one.  If I were going to introduce someone to beer, I’d recommend a sampler, so the fact that I could try a number of different beer cocktails for one flat fee was reason #2 that I was excited for this event.

The first one I tried was called Boca Loca Jungle Bird Shandy, by Matty Durgin.  This was a refreshing, fruity cocktail made with Boca Loca Cachaca (a Brazilian rum), Aperol, pineapple juice, bitters, and Colette Farmhouse Ale.  Normally I’m not a fan of Colette, but I learned that–in a cocktail–I can actually drink a beer I don’t usually like. I was pleased to come to this realization upon the first drink of my first beer cocktail. This was a fairly light, tasty drink that is perfect for those hot summer months.

I stopped next at the table of Joshua Peter-Smith for a Yeti Snapshot.  When I saw the Yeti, I knew it was going to be good.  Joshua started with about 1/4 of an orange which he proceeded to squeeze right into the glass–now that’s some freshly squeezed orange juice.  Also Leopold Bros. Michigan Tart Cherry Liqueur (I love Leopold’s!), SNAP Gingersnap Liqueur,  Angostura bitters, and Yeti.  Shake vigorously–and this man can shake, I tell you.  Served over crushed ice, garnished with fresh orange and ginger. This one was creamy and somewhat rich, yet the gingersnap liqueur and fresh ginger offset it and provided a clean, crisp feeling.  This ended up being my favorite drink of the night (pictured below). 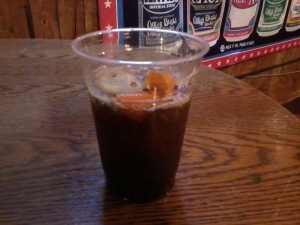 While the Yeti Snapshot was my favorite actual drink, the next drink had the most creative name.  Created by Glenn Pollak, the Buford “Mad Dog” Tannen was one of his “mustache series” beer cocktails, in honor of those with fabulous mustaches.  If the name sounds a bit familiar, think Back to the Future III.   The Mad Dog had me a little intimidated, as the first ingredient I heard was “egg.”  Not too sure about that.  But it depends on what else is in it: Leopold Bros. American Small Batch Whiskey and their Michigan Tart Cherry Liqueur, Angostura bitters, nutmeg syrup, and Yeti. Interesting.  Very interesting.  I was given only a small taste, as it was leftover from the “photo shoot” that had taken place just before the event (FYI: if you want some great pictures of the beer cocktails, go to Eater Denver.  Those people get paid to take photos and write articles, and they got to snap shots of the drinks in actual glass glasses, complete with beautiful garnish and all, while the rest of us poor saps got stuck with low lighting and plastic cups).  But a small sample ended up being just right for this particular drink.  I can’t stomach too much of a cocktail containing raw egg. There’s just something about the thought of it that kinda creeps me out.

Moving on, I tried the Sweet Lady Country Cocktail by Justin Lloyd.  This one was made with Peach Street Colorado Straight Bourbon, Aperol, muddled mint sugar, Colette, and garnished with fresh mint.  Like the Jungle Bird, this one would be an excellent summer cocktail as well.  It was somewhat spicy, and I tasted just a hint of cinnamon (see other not-so-great-picture below, though I did take this one outside for a bit of natural light).  I’m not a big fan of mint drinks, so I didn’t love it, but it was something different at least. 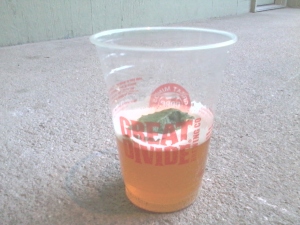 Walking by Ryan Conklin’s table I noticed Great Divide’s Claymore Scottish Ale and had him whip me up a Chai Scotsman.  This drink was made with Benedictine Liqueur, Leopold Bros. Three Pins Alpine Herbal Liqueur (which reminded me of Chartreuse), Dancing Pines Bourbon Whiskey, a nutmeg-cinnamon syrup, Calymore Scottish Ale, garnished with lemon.  This was definitely the strongest drink I had.  The Bourbon was the most noticeable flavor, and I did not need much of it to get its full effect.

And now for something completely different.  Britt Henze, the only female bartender in attendance, had something called the Texas Hops Em.  This was one spicy drink, made with Thai chili, house-made orange/basil/jalapeno tequila, muddled orange, Domaine de Canton (ginger liqueur), Hercules Double IPA, served over cubed ice and garnished with fresh orange.  I love Hercules, but interestingly enough this drink reminded me more of a bloody mary than anything else.  That would be fine if I liked bloody marys, but I do not.  However, this would be a great drink for those who do, and especially for those who like them hot and spicy.

Just when I thought I’d had all I could handle, I noticed some bottles of Titan IPA at Ryan Conklin’s table.  Titan is one of my staple beers, so of course I had to try a cocktail made with it.  While there was nothing “on the menu” that included Titan, I asked Ryan to come up with something for me.  His combination was quite interesting: Campari, Leopold Bros. American Orange Liqueur, Carpano Antica Sweet Vermouth, and Titan, garnished with fresh cucumber.  I’ve never tasted anything like it.  I have very little experience with vermouth as it is, so the flavor of this cocktail was unique and impressive.

I still had drink tickets left to use, but after all of that, I was done.  For one, I had to work in the morning.  And I’d had just about all I could take after 2.5 hours of horrible, repetitive classic rock blaring at a ridiculous volume out of the speakers (and was about to go broke playing my own tunes from the juke box at 50 cents a song so as to not go insane from their Pandora station).  I am so happy I attended the event though, as it was the perfect introduction to a wide variety of beer cocktails.  Now that I’ve experienced several different beer cocktails, I have come to the conclusion that I am not a fan.  While it’s an innovative idea and something fun to play around with, I’ll stick to beer.  And cocktails.  But not beer cocktails.  Now I know.  And knowing’s half the battle.