I attended the November Crafty Ladies Beer Club, which was held at The Sandlot at Coors Field. So the featured brewery was, of course, Blue Moon. When I got the e-mail my first thought was, “No thanks.” But a couple of things changed my mind. First, a friend asked if I was going, so I figured it would be more fun with her, and since The Sandlot happens to be a block away from my loft I changed to, “Why not?” After all I’d never been there, considering one is required to have a Rockies ticket stub upon entering; my complete and total disinterest in sports automatically denies me access to The Sandlot. But not on this occasion.

I don’t care for Blue Moon’s Belgian White, their standard brew. So I thought a good way to kick off the evening would be to go out for happy hour before Crafty Ladies and drink something tasty. A couple of strong barrel-aged stouts and an espresso martini later, it was time for the event. First up: Belgian White with their standard orange peel. Meh. But I drank it, of course. I even had another while waiting on my group’s turn to tour the brewery.

While most Crafty Ladies events involve beer and food pairings, this one…not so much. I saw a few chafing dishes heated by Sternos, and I decided it would be better to stick with an empty stomach rather than sampling whatever deep-fried “goodness” was being offered. Thanks to pre-drinking and not eating, when it came time for the tour I was at the point of not really paying attention as well as I should have. So I don’t know what kind of beer we got to sample fresh out of the tank, but I do remember putting my cup down there to catch some as it came shooting out–that was the fun part! 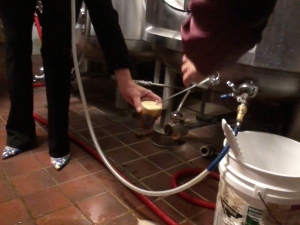 After the tour we gathered around to hear Head Brewer Keith Villa talk about the history of Blue Moon and some of its other beers. While he was speaking we got to try a few more beers, a couple of which I thoroughly enjoyed, very much to my surprise. One was Tongue Thai-Ed, an ale brewed with lemongrass and basil. Such interesting herbs for a beer; I’ve never had anything like it. I also loved Pine In the Neck, their Double/Imperial IPA (75 IBUs). It was actually very hoppy and flavorful. I’ll admit I was fairly buzzed at that point, but I’m pretty sure I would still feel the same about it if sober. Not sure if I’ll ever find out though, as I don’t see either of those beers on their site and don’t know where to buy them.

I am glad I decided to attend Crafty Ladies at The Sandlot. I finally got to see the place, and I learned that Blue Moon actually has a couple of different, interesting, delicious beers. Who knew?!