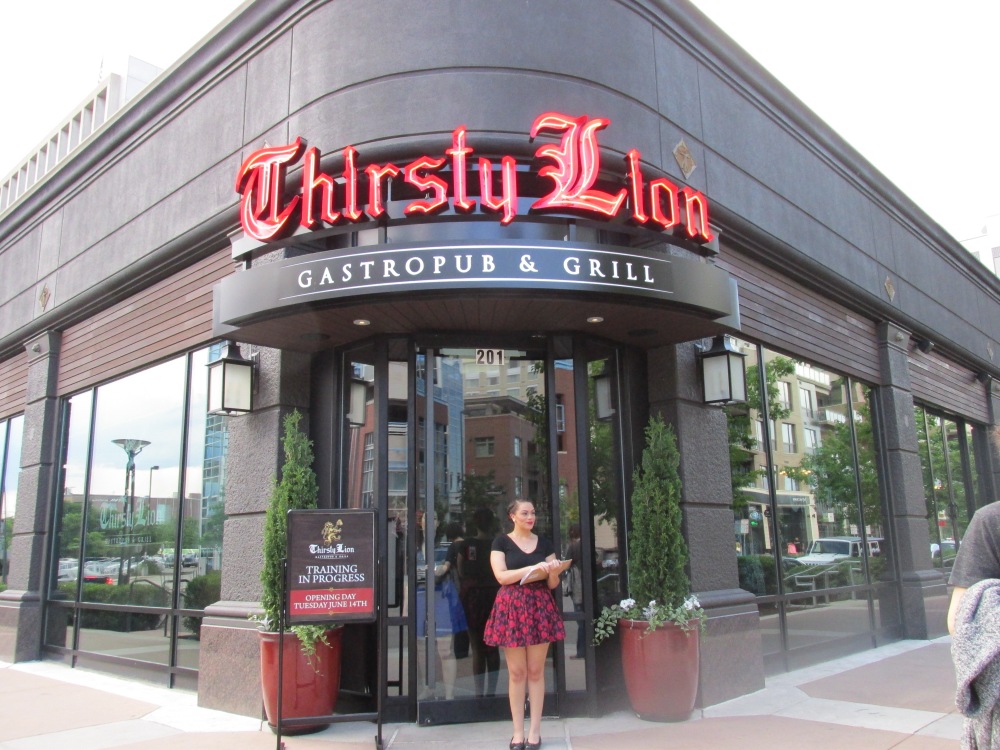 Thirsty Lion just opened its second Denver location: Cherry Creek. I’ve been a fan of Thirsty Lion since they opened at Union Station in 2014. What first drew me in was the beer list: dozens beers on tap, many of them local. And once I tried the food, I was hooked. So I was excited to visit the newest location at 201 Columbine Street in Cherry Creek North.

I was invited to try it out during a media night, just 5 days before opening its doors to the public. As I approached the building I could see that it is beautifully constructed, both outside and in. The entire place is very spacious with lots of seating options and large windows to let in natural light.

While I clearly love beer I also enjoy a good cocktail, and Thirsty Lion has plenty of them. After much consideration I went with a Blood Orange Margarita, and I was pleased with my decision. I had such a hard time choosing that next time I have to try the Habanero Margarita and Pear Martini, as I really wanted those as well.

I personally love appetizers; I sometimes order two or three to split with my companion and call it a meal. A couple of my favorites at Thirsty Lion are the Baked Soft Pretzel with beer fondue and Pan Seared Shishito Peppers with chipotle aioli dipping sauce (see photos of them from a past visit here). But This time the Tempura Green Beans caught my eye. They were nice and crispy, and the dipping sauce was amazing.

Thirsty Lion Cherry Creek offers an impressive selection of craft beers and ciders, many from Colorado breweries, including Dry Dock, Left Hand, Avery, Upslope, and Odell to name a few. I was thrilled to see one of my favorite local beers as a seasonal rotating tap: La Folie from New Belgium.

My guest and I were already getting full from the appetizer and drinks, but we forged ahead and ordered entrees. Both the Margherita pizza and Veggie Burger were delicious, just like everything else I have ever had from Thirsty Lion.

The menu is huge, offering a wide variety of items from burgers and sandwiches, pizzas, salads, fish & chips, sirloin steak, and much more. If you are in Cherry Creek, check out Thirsty Lion. It has the best beer selection in the area, without a doubt. And you’re sure to find a tasty dish or two to pair with your beverage!