This isn’t my first post about Thirsty Lion Gastropub & Grill, and I suspect it won’t be my last. Since the Union Station location first opened in Denver in 2014, I’ve been somewhat of a regular. Why? I’ll start with the obvious: the beer—over 50 taps, mostly craft. Additionally, Thirsty Lion has a really fun, casual atmosphere. And then of course, there’s the food. As a vegetarian I often have limited choices at restaurants. Not so at Thirsty Lion; they have a bunch of excellent veggie dishes. Some of my favorites include the house-made veggie burger, mac & cheese, grilled veggie panini, giant soft pretzel (with beer fondue!), and spinach & artichoke pizza. And now I can add one more to my list:

The Spring Seasonal Menu launched recently, and I did a double-take when I saw this burger on the menu. I’d heard a lot about it and knew there are very few places in the area to find it. So naturally, I headed to Thirsty Lion to try it. And folks, the hype is real. I love this burger!

Though it definitely looks like a hamburger, I didn’t find it to taste exactly like beef (I consider that to be a good thing), but it’s fairly similar. The texture resembles meat, but this burger has its own unique taste, and it’s hearty (filling!) with lots of flavor. 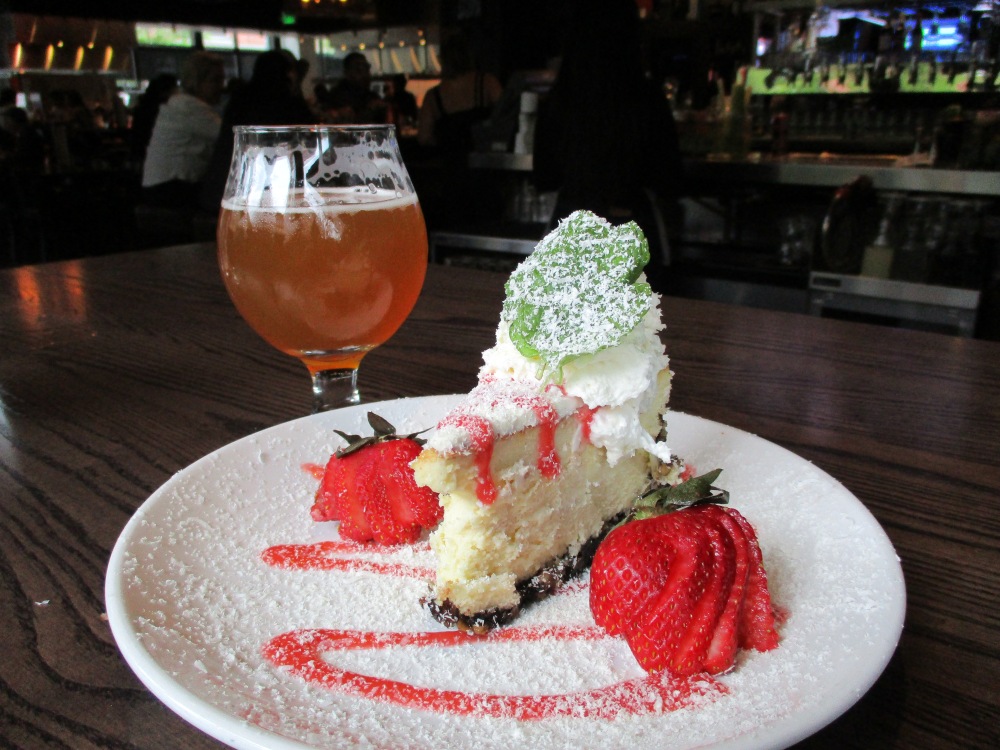 Another item on the Spring Menu is the Strawberry Rhubarb & White Chocolate Cheesecake. And yes, it tastes as good as it looks. I’ve had a couple of beers brewed with rhubarb, but I only recently ate rhubarb for the first time, and I really enjoyed it. So I was excited for this dessert, which was scrumptious.

At the beginning of this post I mentioned the beer selection, to which I’d like to add that there is always a plethora of local beer on tap at Thirsty Lion. During my most recent visit I chose a Yeti from Great Divide Brewing Co. and a Modus Hoperandi from Ska Brewing, two of my staple Colorado beers. You can also routinely find beers from Odell, New Belgium, Left Hand, Denver Beer Co., Funkwerks, Dry Dock, and many others.

Speaking of beer, the Cherry Creek Thirsty Lion (not available at the Union Station location) has cool a program going on now through September called the Trilogy Series, where a different Colorado brewery’s series is featured each month through the summer. Three 13 oz beers will be offered as a trilogy for $15:

Complete the trilogy (either alone or with friends) and enter to win a Beervana Mountain Ski & Snow Getaway! I suggest enjoying these local beers on the awesome patio in Cherry Creek!

Lots of exciting new stuff happening at our Denver Thirsty Lion locations. Stop by and check out the fun!