I LOVE Falling Rock Tap House in LoDo.  With around 75 beers on tap, Falling Rock is one of the absolute best beer bars in Colorado.  They have now been here for 15 years, and last week they celebrated in a big way: 10 days of events & special beers.

“Steve has had a 2 gallon Cask from the original Pre-release of Stranahan’s Colorado Whiskey sitting in the Bull & Bush Cellar filled w/ Liquid Brain for the past 6 yrs. Chris and the Bull & Bush Team, Gabe Jeff & Erik, blended that cask with batches of Liquid Brain that were 7yrs old (aged in Burgundy wine Barrels), a 2 yr old fermented with a different yeast strain & aged in a Buffalo Trace barrel, and a ‘Double Barrel’ batch aged 1 yr in a Pappy van Winkle Barrel & 1 Yr in a Buffalo Trace Barrel. The original plan was to have the years add up to 15, but we got carried away and it came out to 17, oh well. It’s in a cask, so that makes up for the extra two years because doing cask conditioning will take 2 years off your life! Don’t expect this one to last long, there’s only 10 gallons of this!”

It was very delicious and very strong; the conditioning made this beer taste much more like a barleywine than an imperial stout.  It’s not something I could drink a lot of, but I sure am glad I got to try it.  I hope Falling Rock teams up with another local brewery to make something extra special for next year’s anniversary week too! 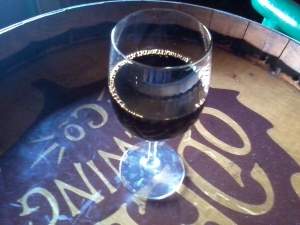