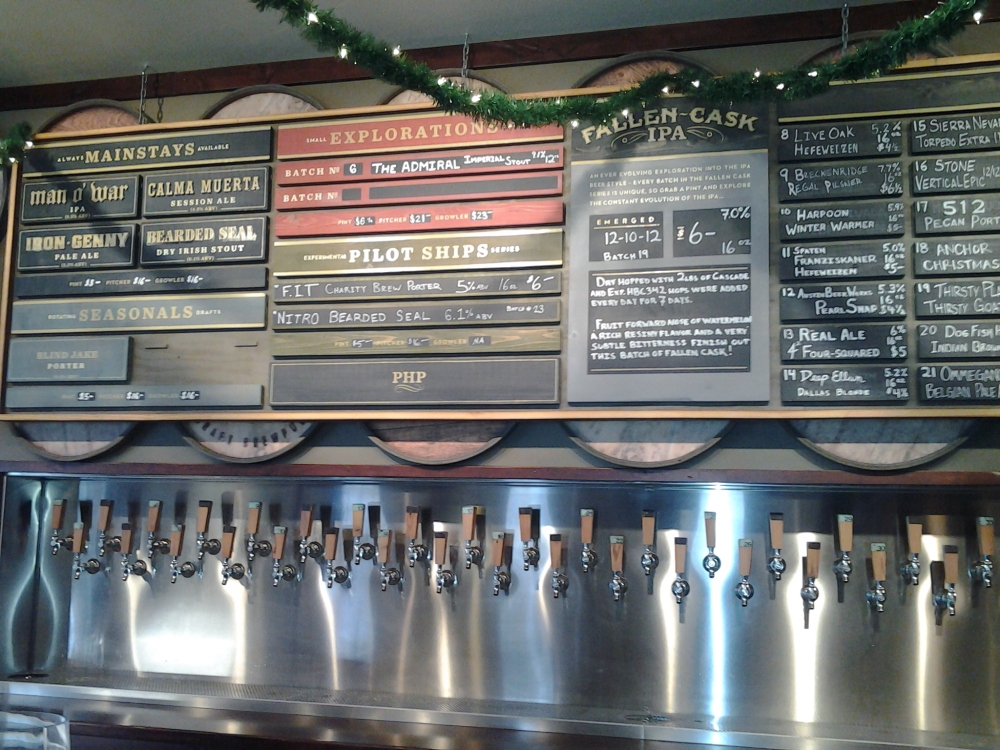 Two of my favorite things in life: beer and pizza. And, more specifically, IPAs and pizza (as for pizza, I enjoy many different kinds). So I could not resist a trip to Pinthouse Pizza on my recent visit to Austin.

My brother, an Austin resident, had also heard of Pinthouse but had never been, so we decided to try it out for lunch. It is set up to where you order food at the register and your name is called once it’s ready. We ordered our pizza and salads and proceeded to the bar for some pints. I went with the Man O’ War, their standard IPA on their “Mainstays” menu (6.5% ABV). LOVED it! My brother got the Fallen Cask IPA (7% ABV), which was even better! Sadly, I had destroyed many a brain cell the previous few days, and I wasn’t firing on all cylinders…so I failed to make note of just what exactly made these beers so damn delicious. I have no tasting notes whatsoever. So you’ll just have to trust me on this: if you like hoppy beers, you will definitely enjoy these two IPAs. I’m a pretty harsh critic when it comes to IPAs, and I was more than pleased with both of Pinthouse’s offerings.

Honestly, I thought the pizza left a little something to be desired. I ordered mine with peppers and onions, and I felt like they were thrown on during the last minute of cooking. But I really liked the place overall: nice space, spectacular beers, friendly people; I would definitely give the food another chance. There are a few appetizers and salads that sound great.

I had hoped to meet up with head brewer Joe Mohrfeld (former Odell head brewer), as I was looking forward to talking both Texas and Colorado beer. But he was gone for the day by the time we arrived.

I would have liked to have sampled all of their brews, but unfortunately for me it was my last day there, and my 4th day of non-stop beer drinking left me feeling dehydrated and not exactly up for a fifth…but I’ll be back soon enough and will make sure to visit during one of my first days. Cheers to Joe for brewing up a couple of the best IPAs I’ve had in a while!