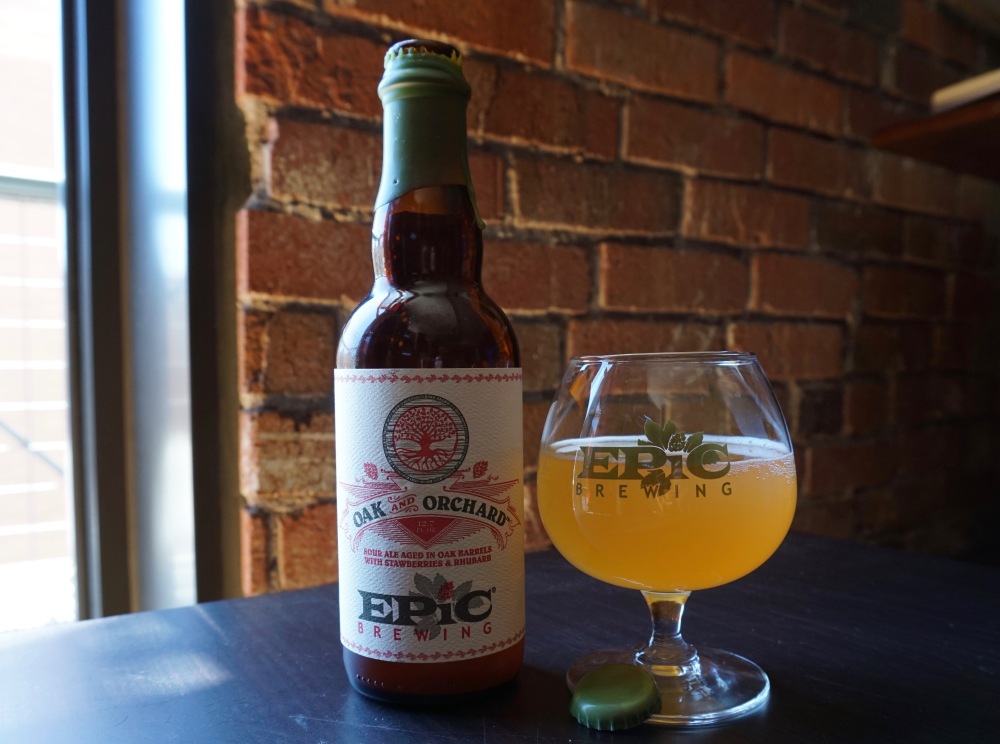 ABOUT: A bit of info from Epic: The base beer is a Lambic-inspired, 6.9% ABV, light sour ale that is aged in an oak foeder for eight months. The fruit is added toward the end of the aging process allowing most of the sugars from the fruit to be fermented, while leaving huge amounts of flavor and aroma.

MY THOUGHTS: I have really enjoyed all of the Oak & Orchard beers from Epic Brewing since I first tried them last year. I posted about the series in March 2017, and at that time the Dark Sour with Plum topped my list. And now comes Epic’s latest Oak & Orchard beer: Strawberry Rhubarb Barrel-Aged Sour Ale, which is my new favorite!

This was one of my first experiences with rhubarb. I’ve only had one other beer brewed with rhubarb, and within the last couple of months I finally ate rhubarb for the first time ever (in the form of a couple of tasty desserts). So I was pretty excited and hopeful about this beer.

In the first few sips I mostly get a lot of strawberry flavor—no complaints there! And then as I let it warm up some, I start noticing the rhubarb coming through. I definitely recommend giving it a little time to let the flavors come out and mesh together they way they were meant to. The full fruit flavors blend together so well.

If you see Epic’s description of this beer (above), it refers to it as a “light sour.” If you’re a sour freak like me, I often wonder if a beer will be “sour enough” for my taste. When choosing a sour I want to know that it’s truly sour as opposed to just being “tart.” While Strawberry Rhubarb is light in color and mouthfeel, it’s definitely a true sour. It is really an excellent, well-brewed, delicious beer. I love it! Be sure to get this limited-release while you can!