Dark beer season is here! And there are very few dark beers I look forward to more than the Baptists from Epic Brewing Company. From Epic’s Exponential Series we have the Big Bad Baptist Imperial Stout, Big Bad Baptista, and new this year is Quadruple Barrel Big Bad Baptist.

Big Bad Baptist (12% ABV) is the original of the series, an imperial stout with coffee (the type varies with each batch) and cacao nibs. This 2018 Baptist is brewed with a Columbian origin roasted coffee by Blue Copper Coffee Roasters in Salt Lake City. The barrel-aged flavor really comes through in this year’s BBB.

Big Bad Baptist is one of the finest imperial stouts around, so when you take this base beer but brew it with Mexican coffee, chocolate, cinnamon and vanilla, you’ve got Big Bad Baptista (12.1% ABV), which is probably the best Mexican Chocolate stout I’ve ever had (and I’ve tried many). I found it to be a bit lighter on the cinnamon this year with a more prominent barrel aged taste. In fact, I think Epic really brought it with the barrel-aging in all of the 2018 Baptists. 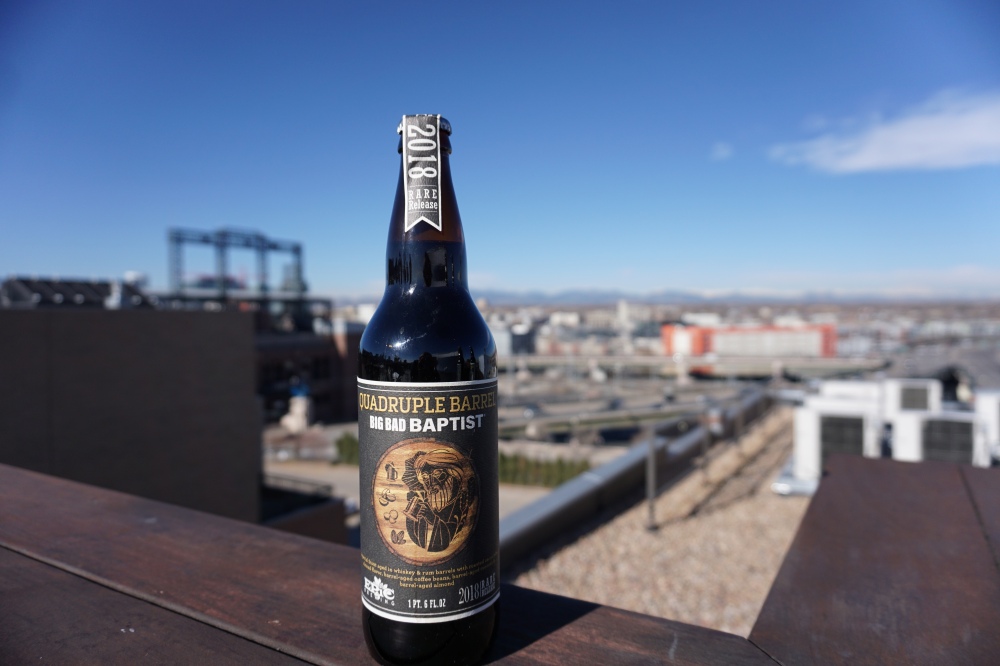 In years past, Epic released Double Barrel Big Bad Baptist and Triple Barrel Big Bad Baptist, and they took it up yet another notch this year with the Quadruple Barrel. Aged in rum barrels, it’s boozy (12% ABV) with lots coconut and hints of coffee and almond. I was thrilled at the amount of coconut I could taste in it. Epic’s Director of Brewing Operations, Jordan Schupbach, explains how Double Barrel got its distinct, intense flavors:

“We’re taking our 100% barrel aged philosophy to the extreme and barrel-aging any ingredient that will absorb the flavor and character of barrels before going in the beer. What’s great about this approach is that the adjuncts don’t mask any of the barrel character we’ve worked so hard to develop in the beer. Cracking the casks of coconut and almond open after they’ve aged is amazing. The entire brewery fills with the aroma and everyone starts to get excited to finally taste the results,” says Schupbach.

Quadruple Barrel BBB is especially nice for the holidays, as it pairs well with hard cheeses and dark chocolate desserts. If you only try one of the beers in this post, make it this one.

All three beers in the Baptist series are seriously some of the best stouts ever. I recommend them all 100% and am proud to spread the word about how wonderful these beers are. I recommend letting them warm up a little before enjoying, as this will really make the flavors stand out. All three are being distributed nationally to all of Epic’s markets and are currently available for a limited time.